← more from
RareNoise Records
Get fresh music recommendations delivered to your inbox every Friday.

Twinscapes Vol​.​2: A Modern Approach To The Dancefloor

by Lorenzo Feliciati and Colin Edwin 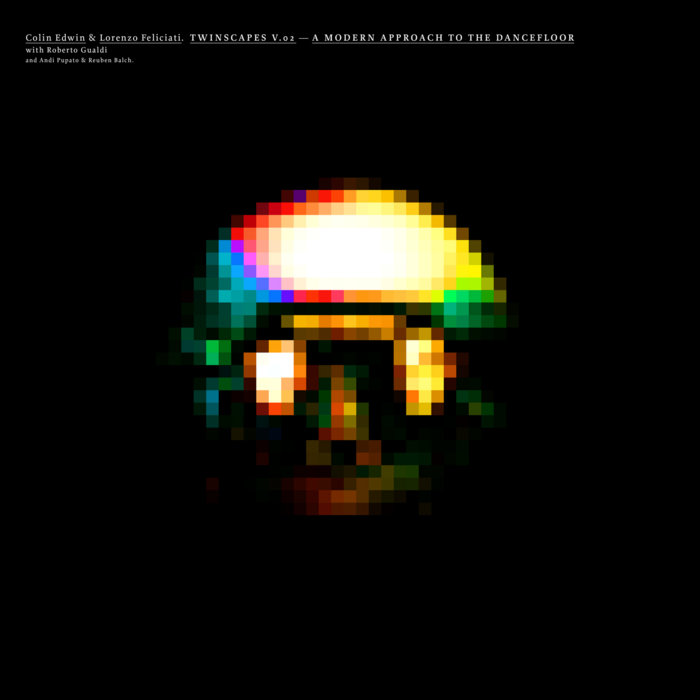 Bassists Colin Edwin and Lorenzo Feliciati Blend ‘80s Pop and Prog
On Twinscapes Vol.2: A Modern Approach To The Dancefloor

For their second Twinscapes collaboration, bassists Colin Edwin (of Porcupine Tree and Metallic Taste Of Blood) and Lorenzo Feliciati (Naked Truth, Berserk!) address their respective ‘80s pop roots in the context of the same ambient soundscapes, freewheeling improvisations and prog-rock flurries that graced their 2014 self-titled RareNoise Records debut. Picture Soft Cell jamming with King Crimson, Ultravox with EL&P, Depeche Mode with Gentle Giant and you’ve got an idea of what’s happening on Twinscapes Vol.2: A Modern Approach To The Dancefloor

In exploring dance floor music on Twinscapes 2, multi-instrumentalists Edwin and Feliciati
pay homage to some iconic ‘80s bands while also pushing the envelope on that idiom. “As with the first album, there was no conscious decision or discussion to sound a particular way,” says Australian-born Edwin, “but I guess it’s the case that both Lorenzo and I have a connection with having played progressive rock and also that we were both around in the ’80’s, so that shared history has kind of come out on this record. As before, we’ve simply followed our instincts and common ground.”

The Italian-born Feliciati recalls that, contrary to popular belief, the ‘80s was indeed a fertile period for musical experimentation. “I remember buying Genesis’ Trick of the Tail, which I still love today, and the first Devo album. And I clearly remember being exposed and enjoying music from new wave bands like The Stranglers, Human League, Ultravox and Japan together with fusion bands like the Mahavishnu Orchestra and Weather Report. I saw the last tour that Jaco Pastorius did with Weather Report promoting Night Passage…the night that changed my life. And I also remember going to see Talking Heads live with the Remain in Light band featuring Adrian Belew. From my point of view, everything happening in music then was with elements of Prog, Jazz, Rock, African music. So I always disagree that the ‘80s was a poor decade for music.”

Edwin heartily concurs. “I think there was some really quite unusual and adventurous music on the charts back in the ’80’s, Japan being a great example. They had chart success but the music was quite unique and very original. Though a little more obscure, another example would be Stump, whom I first saw playing live on prime time TV. I can’t imagine a present day equivalent getting similar exposure.”

Edwin also remembers the ‘80s being a particularly bass-centric era for music. “I was certainly aware of Ultravox, Soft Cell and Human League, all bands who were known for using synths and adopting the nascent technology of the time. But there was also a lot of really upfront and prominent bass playing in that era, from mainstream things like Mark King with Level 42 and Pino Palladino on those Paul Young records to things like Siouxsie and the Banshees and Bauhaus, Peter Hook with Joy Division and New Order, Bruce Thomas with Elvis Costello and Kevin Hopper with Stump.”

Edwin and Feliciati apply their own formidable bass chops to the ten potent tracks on Twinscapes Vol. 2, while Lorenzo adds on keyboards and guitars in the studio and Colin contributes rhythm design and programming. They share bass duties on all tracks, with Edwin focusing strictly on his signature singing fretless bass sound and Feliciati alternating between groove-heavy fretted bass and more lyrical fretless bass. “One of the great things about working with Lorenzo is that we don’t really need to discuss things a great deal,” says Edwin. “We often have similar ideas about how things should fit together or how to create a full sound without getting in each other’s way. We’re also a good partnership in that we share enough similar opinions and ideas to fit together without conflict, but we have enough differences to make things move in unexpected directions and push each other to try new ideas.”

Adds Feliciati, “Twinscapes is a dual bass project but from my point of view it's a creative collaboration between two composers/multi instrumentalists/ arrangers and producers. I am sure that who bought the first album will be delighted from this new one. It's 100% Twinscapes. We are a ‘progressive’ band because we like to let the music show the direction instead of using the same formula again and again. It's been very natural, when we start to compose a song together — or exchange files — to let the music drive us instead of trying to push it in a more planned direction. It’s fun and always challenging.”

Twinscapes Vol.2 opens with the straight-up dance floor number “Tin Can,” which is actually a nod to’70s experimental German ‘krautrock’ band Can while pieces like "Future Echo," "Precipice" and "Heat Collison" carry more of a prog-rock/fusion vibe. “We certainly have to acknowledge a certain prog-rock and fusion influence,” says Edwin, “but to me it’s all just about making the music work in an interesting and engaging way. And actually I think ‘Heat Collision’ has quite an emotional pull. For me, it has a real atmosphere.”

The moody “Bedroom Corner” features Edwin playing the melody on fretless bass while Feliciati holds down the groove on fretted bass. “In a Haze” has Edwin exploring eBow on his fretless bass before the pieces builds to a grand bass crescendo. Edwin’s singing fretless bass is also prominent on “The (Next) Level” while the slow rolling anthem “In a Daze” builds to orchestral proportions on the strength of Feliciati’s layered distortion guitars.

One of the more intriguing tracks on the album is “Severing Suns,” which blends rich chord voicings with Gregorian-styled choral music and prominent fretless bass playing. “This is really quite a special track,” says Edwin. “Voices and vocals in general really fascinate me, and I have a special fascination for the connection between voice and bass. It’s perhaps our most experimental track with a lot of unexpected elements: the blend of basses, vocals, electronics, and textures, but with a strong groove too.”

The exotic “Ghost of Tangier” is a powerful showcase for Twinscapes drummer Robert Gualdi. “It’s really meant as a space for Roberto to do his thing,” says Edwin. “We often have a track in the live set where we create some textural backing for him to improvise against and this is a quite similar to a lot of those moments. Roberto is an all-around creative drummer, equally comfortable with odd times and slamming 4/4, playing structured parts and also improvising.
He has the requisite sensitivity for the more reflective moments but he’s not afraid to let his inner hooligan out for the rockier parts too.”

Adds Feliciati, “On that track we gave Roberto complete freedom. It’s basically a drums solo/composition where we added all the textures to boost the atmosphere that was already there with just drums. Roberto is an incredibly musical drummer, not a common thing. He is a top session man and he is one of the busiest drummers in Italy, but in Twinscapes he helps the music with a very creative approach and doing a deep research for the right sounds. And he is always groovy and in the pocket. After his contribution on the first Twinscapes album we did a lot of gigs as a trio with him and we were extremely pleased by his musicality. There is quite a lot of improvisation in our performance so Twinscapes needs a very solid drummer but one with a creative approach and with big ears. Roberto is all of that, and he is also a wonderful person to work, travel and play with.”

Regarding the nature of their collaborative process in the studio, Edwin explains, “We tend to make decisions and work very fast, and there’s a mixture of improvisation and carefully structured elements for sure. And in fact, there are a lot of moments across various tracks where I can’t distinguish who is doing which part, or where I’ve completely forgotten who did what. So we’ll certainly have some fun when it comes to playing these tracks live.”

While this second Twinscapes outing is a continuation of Edwin’s and Feliciati’s indelible chemistry together in the studio, they hint at even more things to come in the future. “We’re still exploring for sure,” says Edwin. “Twinscapes is much more than just an excuse to dig out my ebow and more obscure pedals and pick up the bass. I think Lorenzo and I have a really good creative partnership and we have done some really memorable gigs too. So we still have a lot more to discover and I am looking forward to playing this new material live. As with the tracks from the first album, I am sure they will be great to explore and develop in front of an audience.”

Twinscapes Vol.2: A Modern Approach To The Dancefloor

All compositions by Colin Edwin and Lorenzo Feliciati.
Except 'Ghosts of Tangier" Edwin/Feliciati/Gualdi.
Published by RareNoisePublishing (PRS)

Bandcamp Daily  your guide to the world of Bandcamp

Little Brother joins the show to discuss their beautiful journey, plus tunes from Fat Tony