← more from
RareNoise Records
Get fresh music recommendations delivered to your inbox every Friday.

by Lorenzo Feliciati and Colin Edwin 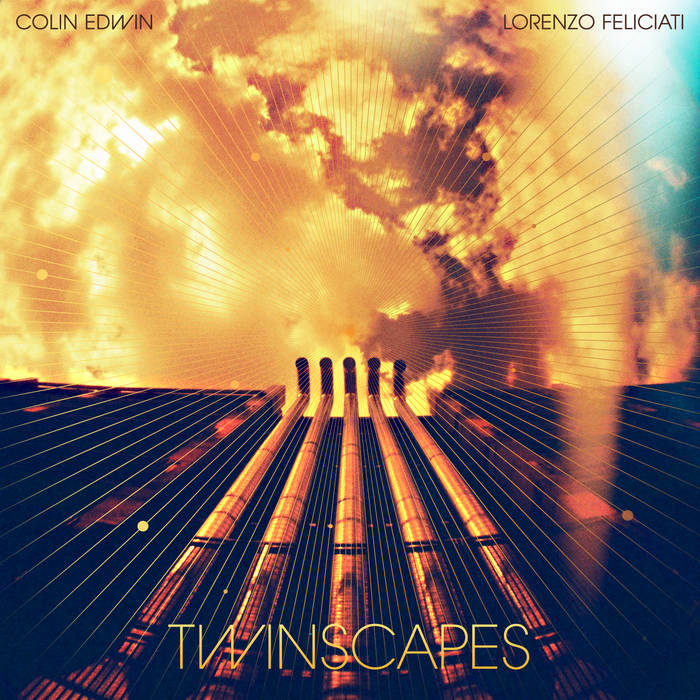 Two bassists from two different continents -- Italian Lorenzo Feliciati of the adventurous jazz-rock band Naked Truth and the intensely searching nu jazz group Berserk! and Australian Colin Edwin of the longstanding prog-rock band Porcupine Tree and the heavy-duty, experimental Metallic Taste of Blood as well as Ex-Wise Heads and Burnt Belief -- come together to make one potent statement on Twinscapes. With special guest appearances by acclaimed trumpeter Nils Petter Molvaer, saxophonist David Jackson (of Van der Graaf Generator), Swiss percussionist Andi Pupato (of Andres Vollenweider and Nik Bartsch’s Ronin) and drummer Roberto Gualdi (of the Italian prog-rock band PFM), this bass-dominant project, which was mixed by renowned bassist-producer Bill Laswell, travels from ambient soundscapes to slamming funk workouts and kinetic grooves to cinematic-sounding pieces that defy easy categorization. And there are plenty of virtuosic fireworks along the way by all the principal soloists on this outstanding RareNoise release which is released on March 3rd on CD /vinyl and Hi- Res digital download.

Feliciati and Edwin first got together for an impromptu one-off gig in London early in 2013, and they discovered an instant chemistry on the bandstand. As Colin recalls, “I was familiar with Lorenzo’s band Naked Truth and also his solo album Frequent Flyer, and coincidentally had been toying with the idea of a dual-bass project with a bass player friend of mine. So I immediately thought it was something worth doing as an experiment, at least. And I knew that this project would lead us to explore other things you tend to do a lot less of in a regular band set-up, like using different effects, E-bows, have the bass playing melodies and so forth.”

In preparing for their session together, Feliciati and Edwin spent a few productive days in a studio in the English countryside, fleshing out compositions from the bones of each other’s sketches. Playing both fretted and fretless basses, the two kindred low-end spirits create a formidable undercurrent on the 11 powerful tracks from Twinscapes while embellishing the open-ended pieces with freewheeling improvisation. “We had a very short time to plan what to do and only a small amount of rehearsal,” says Edwin, “but even from our brief rehearsal, it certainly felt like we had a natural way of playing together. Without any real discussion we managed to find a way of fitting around each other, despite occupying the same frequency area. It requires a certain amount of intuition and sensitivity just to be able to do that, without stepping on each others toes and filling up the same space.”

That kind of complementary attitude permeates Twinscapes, though each of the bassists do step out with stunning solos from track to track. They kick off the proceedings with “Shaken,” which begins with a calming, ambient drone before developing a thickly textured undercurrent from multiple overdubs laid down by the two bassists. As drummer Gualdi fuels the track with powerhouse backbeats, Edwin plays the fretless solo, the harmonic delays and the picked bass parts while they combine on the tight unison riffs. Feliciati adds false harmonics and octave bass lines on this dynamic opener. On the more lyrical “Alice,” a piece written by Feliciati for his daughter and which appeared on his first-ever solo release in 2003, he plays the main bass part and the chordal part while Edwin covers the melody, the harmonic slides and the beautiful fretless bass work. Lorenzo provides the ambient wash with his bass pedals on “In Dreamland” and Colin contributes to that ethereal vibe by using the E-bow in conjunction with his bass.

Feliciati turns in some virtuosic fretless bass work on the abstract “Breathsketch,” then kicks on his fuzz box for some nasty bass lines on “Transparent,” which also features some beautifully lyrical, clean-toned trumpet playing by Nils Petter Molvaer. “i-Dea,” a showcase for some raw, audacious, Rahsaan Roland Kirk-inspired tenor sax blowing by David Jackson, has Edwin layering on harmonics and delay lines and also making use of his Electro-Harmonix Sitar emulation pedal on one of his overdubbed tracks. The frenetic romp “Conspiracy” has Edwin laying down a foundation of fat thumbed bass lines. He also covers the melody on fretless while Feliciati plays the fuzz-inflected riffs. “Perfect Tool” starts off with Edwin on fretless bass and Feliciati on guitar. As the piece develops, Feliciati adds a second fretless bass line and some bowed Space Echo parts while Edwin holds down the main groove underneath.

The aptly-titled “Sparse” features Feliciati on organ and main bass parts while Edwin enhances the vibe with fretless bass and eerie E-bow parts. Molvaer also adds his golden trumpet tones to this gentle numbe. “Yugen” opens with ambient washes -- Edwin on E-bow and Feliciati on Space Echo. As the rhythm enters, Edwin layers on delay lines and Lorenzo plays the fundamental groove through an octave pedal. The closer, “Solos,” has Feliciati playing the picked octave bass line while Edwin plays the melody on fretless, and both add ambient textural effects together. The guitar-ish sound heard on this final track on Twinscapes is an old bazouki that Feliciati found lying around the studio and ended up playing.

“It's such a cliche that some musicians only think about their own parts and miss the overall sonic tapestry of what they are working on, so they tend to overplay,” says Edwin. “But Lorenzo and I have both had a lot of experience playing songs and composed music in ensemble situations, so we both have a good sense of how things fit together. Of all the instruments in a group situation, the bass often has more power and is more effective when played in a simple and economic way. And there's a real art to being simple and complementary.”

Adds Feliciati, “In the last 10 years I did a lot of playing at all the Bass Day events all over the world and part of that is to do some jamming all together on stage with other bassists. And I am sure that every time that happened my feeling was, ‘Never again!" Everyone in those situations is just trying to play more and with a more aggressive approach to be on top of the other players...sort of a nightmare in my opinion. So I was sort of full of preconceptions about doing a two-bass project. But what was really new to me was that Colin and I fit together so perfectly and we actually had more fun and joy playing together interactively rather than having one do the rhythm and the other one do the soloing. And the fact that we both have a strong experience in playing songs, not just showing our chops in a format built for that, it really helped to find ourselves on the same path without having to force one or the other to change his approach. We both have tons of chops when needed, but we also both know how to build the foundation of a song.”

Special Thanks due to Martin Elliott for providing crucial source inspiration.

Bandcamp Daily  your guide to the world of Bandcamp

Little Brother joins the show to discuss their beautiful journey, plus tunes from Fat Tony